The aim of this national symposium was to stimulate conversation on the role of academic educators in supporting student mental health and wellbeing. National and international speakers shared insights and lead a discussion of strategies for designing curriculum and creating teaching and learning environments that can support student mental health and enhance learning. Download the program for the symposium here.

The symposium had over 120 attendees from 27 Australian Universities, two international universities, and two organisations (the Tristan Jepson Memorial Foundation and Leo Cussen Centre for Law). 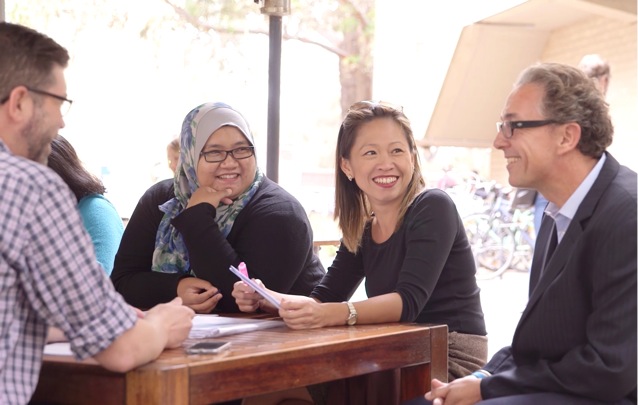 Professor Stuart Slavin, M.D., M.Ed. spoke about his significant efforts to improve the mental health and well-being of medical students at SLU. These efforts have recently expanded to residents, college students, and high school students. Stuart is Associate Dean for Curriculum and Professor of Pediatrics at Saint Louis University School of Medicine. A graduate of Saint Louis University School of Medicine, he completed his residency training in pediatrics at UCLA and then served as a faculty member there for 17 years before returning to St. Louis in 2004. In addition to his administrative duties at Saint Louis University, Stuart teaches actively in the undergraduate medical curriculum and serves as director of the Applied Clinical Skills series of courses. He has given workshops and presentations at regional and national medical education meetings as well as at medical schools across the US and internationally. He has received numerous teaching awards including the Alpha Omega Alpha Robert J. Glaser Distinguished Teacher Award in 2013.

Professor Richard James gave opening remarks. Professor James is Pro-Vice Chancellor (Academic) and Director of the Centre for the Study of Higher Education at the University of Melbourne. He is a leading figure in Australian higher education and an internationally recognised researcher in areas related to higher education policy, equity and the student experience.

Professor Johanna Wyn presented research on being a student in the 21st century. Professor Wyn is the Director of the Youth Research Centre at the University of Melbourne. Professor Wyn specializes in longitudinal research about the dimensions of young people’s lives, including education, work, wellbeing, relationships and family. Professor Wyn was instrumental in the development of the Mind Matters program to promote mental health and wellbeing within Australian schools

Associate Professor Wendy Larcombe discussed the role of the academic teacher in supporting student mental health. Wendy is the project co-leader, with Dr Chi Baik. Wendy is an Associate Professor at Melbourne Law School, the University of Melbourne where she has been researching and developing policy to support student mental wellbeing for a number of years. More recently she led an empirical research project investigating student wellbeing in other disciplines at the University of Melbourne.

Mr Nicholas Fava offered a student response to the first three presentations. Nicholas is currently studying a Master of Public Health at the University of Melbourne. He is a Research Assistant and Youth Research Council Member for Orygen National Centre of Excellence in Youth Mental Health. He is the Director of the I CAN Network, where he advocates for a society that embraces the strengths of people on the autism spectrum.

Dr Chi Baik outlined project outcomes of the “Enhancing Student Wellbeing” project, and gave a guided tour of this project website. Chi is the project co-leader, with Dr Wendy Larcombe. Chi is a senior lecturer in the Melbourne Centre for the Study of Higher Education (MCSHE) at the University of Melbourne. She currently coordinates the MCSHE’s academic development programs including the Graduate Certificate in University Teaching.

Associate Professor Craig Hassed presented his work embedding the Health Enhancement Program and the ESSENCE model into first year core curriculum. He is a Senior Lecturer at the Department of General Practice at Monash University, where he has been teaching at both undergraduate and post-graduate levels since 1989. He is also the coordinator of mindfulness programs at Monash University. He has been instrumental in introducing a variety of innovations into medical education and practice in Australia and overseas with an emphasis on the application of holistic, integrative and mind-body medicine in medical practice.

Ms Margot Fenley discussed teaching practices in the Fine Arts that supported students’ wellbeing and development as actors. Margot trained as an actor at the Victorian College of the Arts, at the University of Melbourne. She currently teaches acting, and acting through song, in the Bachelor of Fine Arts (Music Theatre). She has been Head of Music Theatre since 2012.

Mrs Anneka Ferguson is the Sub-Dean GDLP and Senior Lecturer in the ANU Legal Workshop, Australian National University. Anneka has developed (in conjunction with Stephen Tang) a comprehensive action and research framework to evaluate whether ANU Law’s core Professional Legal Education course is creating practice ready, professional, ethical and well graduates to enter the legal profession; and provide an environment to trial novel practices based on sound theory.

Mr Stephen Tang is a lecturer and a psychologist in the ANU Legal Workshop, Australian National University. Stephen has developed (in conjunction with Anneka Ferguson) a comprehensive action and empirical research framework to both evaluate whether ANU Law’s core Professional Legal Education course is creating practice ready, professional, ethical and well graduates to enter the legal profession. He is a senior mental health legal policy officer with the ACT Health Directorate and a consultant on international mental health law and policy with the World Health Organization.

Professor Rachael Field discussed the Australian Law Wellness Network, of which she was the founder, and encouraged others to build similar networks. Rachael joined Bond Law School as a Professor in 2016. She has received a number of national teaching awards including a national citation in 2008, a national teaching fellowship in 2010 (through which she developed curriculum practices for the promotion of law student wellbeing) and a national teaching excellence award in 2014. Rachael is co-founder of the Australian Dispute Resolution Research Network. She has a portfolio of more than 70 scholarly publications, and is co-author of four books. Rachael’s community service has been focussed on volunteering on the management committee of Women’s Legal Service, Brisbane since 1993. She has been president of the Service since 2004. In 2013 Rachael was named Queensland Woman Lawyer of the Year.

Associate Professor Jacquelyn Cranney and Annie Andrews spoke about creating an evidence-base for supporting students’ self-management strategies. Annie is the Director Counselling and Psychological Services / Deputy Director Student Development at University of New South Wales. Jacky has been the recipient of national psychology and higher education awards for her contributions to psychology education and higher education more broadly. She has received Fellowships and grants that have progressed undergraduate psychology policy and practice, and that have focused on curriculum integration of the development of self-management capacity for all university students. Jacky is a fervent believer in George Miller’s exhortation to “give psychology away”, particularly through providing opportunities for everyone to develop psychological literacy–the intentional application of psychological science to meet personal, professional and societal needs.